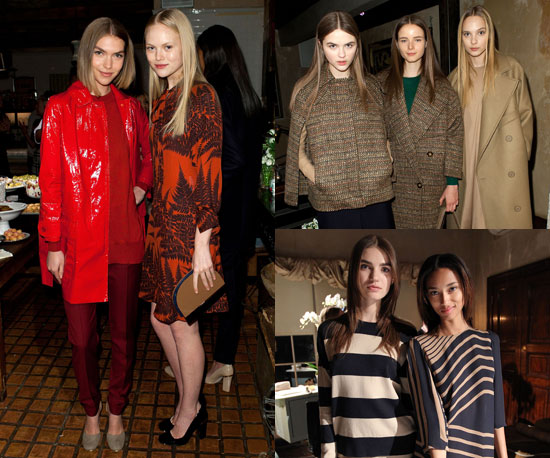 I cringe at the thought of saying it, but Stella McCartney really has had a stellar year. Sure, she was already an authority in the fashion world but 2012 just entrenched her as an absolute legend. You’d think after the year she’s had she might’ve taken stock for a little while to reflect, but she’s right back on the wagon. A couple of weeks into 2013 and she has already launched her Pre-Fall (Autumn) collection. Coming off the back of a year that saw her named Designer of the Year at the British Fashion Awards as well as being named Brand of the Year, she added to her string of accolades the responsibility of being the the Great Britain Olympic Team’s creative director. And to top all of that off she was awarded an Order of the British Empire (OBE) for her commitment to – and excellence in – the fashion industry.

Anyone remotely interested in the fashion world will know that Stella is a huge proponent of the jump suit and at her recent optical line launch in New York she was sporting an oversized tweed onesie, which seemed to be a golden thread throughout the launch – which hosted a collection of 32 outfits and took place at the Americas Society Art Gallery in Park Avenue. She described her choice of clothing by saying “it was about loosening the stricter side of a woman and adding a little playfulness”.

The launch basked in magnificence as a number of celebs made an appearance. Kim Cattral, Alec Baldwin, Mary-Louise Parker, Anna Wintour and Glen Close were all in attendance browsing through snakeskin clutches and monstrous pieces of Perspex jewellery, while observing the models as they lounged on the set, playing scrabble or having their portrait taken.

The daughter of Sir Paul McCartney, Stella’s new collection really put the “man” in “woman” with her latest line as the ladies’ pieces clearly had masculine undertones in varied monochromes. The modern New York feminine foundation was seamlessly interwoven with hints of proper English influence. Pre-Fall’13 sees Stella launching pieces such as structured mini-dresses, billowing broad-striped trousers, chic capes, feathered floral jacquard jackets and over-sized pocketed camel coats. The eveningwear pieces were all about luxe fabrics like silk and velvet and burgundy, red and matte pink column dresses. It’s clear that Stella has hit the ground running this season and at the moment nothing seems as though it has the power to stand in her way.