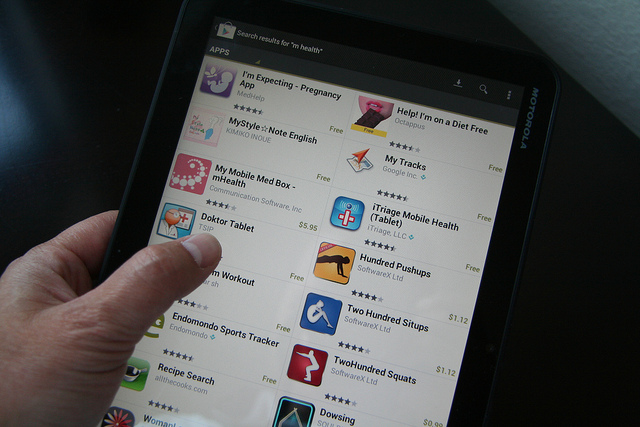 Modern technology allows people to carry vast amounts of knowledge with them wherever they go. With the simple use of smartphone apps, a person can easily do math, convert currencies, find directions anywhere and basically do just about anything that one could imagine. There are even apps out there geared towards a person’s health, but it’s vital for individuals using these apps to understand that they’re not always what they’re cracked up to be.
Health Smartphone Apps on the Market
A person can literally sit back and think of one thing that would make their life easier and then easily find it on the smartphone app market. Like many people say: “There’s an app for that.” Health apps are becoming more and more popular by the day. In fact, recent research has shown that there are around 7,000 apps related to either health or fitness currently on the market.
These health apps range from those that simply make dietary suggestions to ones that claim to monitor serious issues like sleep disorders or diabetes. As mentioned, there are a multitude of these apps out there, and this makes it vital for a person to understand exactly the chance that they’re taking with these apps.
Why Health Apps can be Dangerous
There are quite a few reasons why health apps can be dangerous, and many of these reasons would seem almost common sense. The first thing to consider is that there is no licensing requirement for those who put health apps on the market. These apps are much like diet books: there are thousands of them out there, but not all of them work well.
Another huge issue when it comes to health apps is the fact that they don’t take a person’s medical history into account. There’s no way a mobile app can know everything that a person has went through medically in their life, and this can be disastrous in some cases. A certain recommendation from an app may be ideal for one person, but it can be detrimental for another who suffers from certain medical conditions.
Consequences of Bad Medical Apps
Maybe the most important thing to remember about medical and health apps is that they were created with profit in mind. Trusting these apps can have several negative consequences, one of which is delayed diagnosis. An app that claims to perform a task may instill a false sense of trust in its user, and this may cause that user to wait too long before seeing a doctor.
It’s also possible that an app may recommend a regimen (ie. diet, exercise) that’s unsafe for the individual undertaking it. A workout regimen that’s ideal for a track star, for instance, definitely won’t be ideal for a recent heart attack victim. This situation may seem like an exaggeration, but the fact remains that some apps are giving overreaching advice in very individual cases.
An app that causes serious injury to a person by giving faulty or uneducated medical advice will likely land its developer in hot water. Apps masquerading as legitimate medical tools can cause serious injury or even, in a worst case scenario, death in some cases. Anyone harmed by trusting these apps should seek out an attorney immediately, for instance an attorney New York City based could advise on making a claim for injuries sustained in the use of the app; this can help ensure that they’re compensated for their injury and that the app isn’t able to cause any further damage.
Modern technology is a great thing. There are thousands of mobile apps out there that make life easier every day for millions of people. Unfortunately, a person doesn’t need a medical degree to put a health, medical or fitness app on the market. Luckily, it may be possible to hold app creators responsible if they’re negligent in their claims, but preventing these sometimes tragic consequences is a far better outcome.

Your Body Confidence Back After Being PregnantHow to Get